Elkhart Lake (Wisconsin, United States) – June 20, 2021. What a race for Thomas Nepveu and his #2 Cromwell | Karting Excellence | Home Hardware car prepared by Cape Motorsports, who took his first Cooper Tires USF200 Series win today at the legendary Road America track near Elkhart Lake, Wisconsin. The young rookie, making his first visit to this track, showed how effective his learning has been since the beginning of the season, leading 9 of the 12 race laps and putting up a veteran-like battle with an opponent before winning right at the finish.

“After qualifying 7th on Friday, I knew my #2 Cromwell | Karting Excellence | Home Hardware car was competitive. With a set of new tires for the second race, I was confident. I had a good start to get to 4th place and then a great restart on the 4th lap to take the lead and to keep it until the checkered flag. Thanks to all my partners and my team Cape Motorsports”, said Thomas Nepveu with enthusiasm from the podium.

The 4-mile layout with three long straights and sweeping bends puts an emphasis on smoothness in and out of corners that lead onto the straightaways to ensure the best possible top speed. Thomas Nepveu’s last race, on the Lucas Oil Raceway oval, was an excellent preparation for these high-speed manoeuvres.

This was Thomas Nepveu’s first visit to this track, and he had the opportunity to learn the racing lines and reference points over two one-hour test sessions on Thursday. Covering a total of 36 laps, Thomas ended up 10th quickest in the second session after improving his time from the first session by 0,58 sec, an excellent performance.

The Friday morning official practice sessions brought another quantum improvement, as Thomas ran 9 laps over the 30-minute session, ending up 7th, only 0.1170 sec. behind the quickest car in the session. In addition, Thomas Nepveu was running quicker and quicker laps at the end of the session, with his last lap being his quickest of all despite tires that were showing more and more wear.

After a frustrating 13th place result in Q1, a mere second off pole time, the team decided to let the #2 Cromwell | Karting Excellence | Home Hardware car out late in the second session (Q2) session in the hope that the chances of benefitting from an aerodynamic “tow” were greater. The strategy worked as Nepveu rose to the challenge and turned in the 7th quickest lap on his second timed lap. He covered only four timed laps in the session, ending up in a good starting position for Race 2 and with a set of little-used tires that may come in handy for a race.

Thomas Nepveu moved up to 10th place from 13th on the grid at the start and spent the rest of the 12-lap race there, save for crossing the line in 9th place on lap 5. Thomas Nepveu kept improving over the second half of the race, setting his six progressively “quickest lap” of the race on six consecutive laps (Laps 6 to 11). This showed a steady improvement after a busy early race that included some aggressive passing on a restart after the single caution period.

What a race! Thomas Nepveu said yesterday that he was happy with his 7th place on the grid after Q2. But he certainly had some big plans for the race. After jumping to 4th by the end of lap1, a master move allowed him to pass the three-car pack in front of him and jump into the lead by the end of lap 4.

The rest of the 12-lap race was a demonstration of Thomas Nepveu’s skill, precision, concentration, management of his aerodynamics, clean and error-free driving right to the end. Thomas kept his cool late in the race during a two-car-wide attack from second-place finisher Simon Sikes and won the race by 0,0679 sec. in a side-by-side finish.

This was the first Podium finish and the first win for the rookie driver from Oka (Quebec, Canada.) and a great display of this promising driver aboard a perfectly prepared car by Cape Motorsports. The win puts Thomas Nepveu second in the Rookie-of-the-Year contest, just 28 points behind the leader and his teammate Spyke Kohlbecker.

This weekend marks the mid-point of the 2021 season, and Thomas Nepveu has gained experience so far this year on all types of track layouts and corners, from tight to medium, and especially high speeds such as at the Lucas Oil Raceway oval and the Indianapolis Grand Prix circuit. As he has done for every event so far, Thomas Nepveu has worked hard on his preparation according to the track characteristics using simulation and the exhaustive material prepared by his team, Cape Motorsports.

“I have been working on the simulator to understand the long and quick corners, how to re-accelerate as early as possible out of the corners followed by long straights and on making the most out of the aerodynamic effects at high speeds, to overtake or to make life difficult for the drivers behind me to pass. I’m getting more and more confident in my #2 Cromwell | Karting Excellence | Home Hardware car, and I know that Cape Motorsports is going to give us fast cars,” said the driver ready for top-5 finishes in the two races scheduled for this weekend.

“Road America is one of the Classic American road courses, the racing is always exciting, mostly because it’s one of the few remaining tracks that has multiple sections the drivers can overtake on, Thomas has improved at each race this season and I am sure he will excel at Road America,” explains Dominic Cape, president of Cape Motorsports.

Road America is located North of Milwaukee (Wisconsin) in a national park (Kettle Moraine) and is reminiscent of the Circuit du Mont-Tremblant and of Spa-Francorchamps, two other mythical layouts set in the Laurentian Mountains (North of Montreal, Canada) and in the Ardennes Mountains (Eastern Belgium).

BEST RESULTS OF THE SEASON FOR THOMAS NEPVEU AT INDIANAPOLIS

Oka (Quebec, Canada) – May 15, 2021. Thomas Nepveu had a big weekend at the Indianapolis Grand Prix Circuit, a road course built inside the legendary Indianapolis Motor Speedway’s 2.5-mile oval. Thomas Nepveu once again displayed his improved driving skills as he has done since the beginning of his rookie season in the Cooper Tires USF2000 Championship. After qualifying the #2 Cromwell| Karting Excellence| Home Hardware car in 7thplace on Thursday, Thomas Nepveu crossed the finish line in 9th, 8th and 6th places respectively in the two Friday and one Saturday races held over the weekend. This sixth place is his best result so far this season and suggests that we will see the young Oka driver in the top-5 for the coming races.

The series drivers took part in three practice and qualifying sessions on Thursday, an important learning experience for Thomas Nepveu who was able to work with his team to gradually improve the car, his knowledge of the track and his driving, which is a little different on this hybrid track from conventional road courses. His unwavering determination, absence of driving errors and an ability to learn and adapt to new circumstances served him well.

The oval part of the track requires a great deal of precision from the driver in order to position himself well at the entrance of the first wide corner, to brake without locking a front wheel, and to negotiate all the corners without the usual aerodynamic downforce we see on road courses.

“Our plan for the two first 50-minute practice sessions on Thursday was to learn the unusual layout with its long straight and wide oval part on entry to corner 1, and the other more technical corners of the rest of the layout. We originally set up the car with relatively low downforce to reduce drag and go as fast as possible on the long straight. However, the lower downforce for braking and cornering in the infield corners were new to me and I had to adapt my driving technique accordingly.

In qualifying, late on Thursday afternoon, the team kept us in the pits until about eight minutes before the end of the session so that we used only one set of new tires. There was enough time left when we went out on track to complete three timed laps and I set the seventh quickest time.

After a good start from 7th on the grid in the first Friday race in the #2 Cromwell| Karting Excellence| Home Hardware car, I was in 4th position but then found that the car was slowing by a few tenths of a second which made it difficult for me to maintain my position and I slipped down to 9th place at the end.

The team then changed some settings in preparation for the second Friday race, mainly by giving me a little more downforce and therefore more grip in the tighter corners. The car did feel better but still slowed over the course of the race and I crossed the finish line eighth. We needed to work some more on the set-up for tomorrow’s 20-lap race.

On Saturday, we launched well at the beginning of the race and on a restart on lap seven. I gained a position each time and ended up in 6th position and defended that position right to the end of the 20-lap race. It was not easy, as the car started to understeer on lap 10. I tried to adjust my driving, but I still lack some practical experience in order to compensate for these variations in the car’s behaviour over a race distance. I’m happy with my performance this weekend and I’m looking forward to the next race on the Lucas Oil Raceway oval,” said Thomas Nepveu as he got out of the car.

Next Event – May 27 and 28 – Lucas Oil Raceway (Indianapolis, Indiana)

Here’s a quick recap of where the Canadians that were involved in the race weekend at St.Petersburg placed in their respective series.

First up is the NTT IndyCar series with James Hinchcliffe and Dalton Kellett participating. James finished in 18th place one lap down on the race winner Colton Herta, while Dalton Kellett’s car came to a stop in the area between pit out and Turn #2 on Lap 67 and finished in 23rd position.

Next up for the NTT IndyCar series is the double race weekend at Texas Motor Speedway on April 30-May01.

Below are the results from the Road to Indy series races. 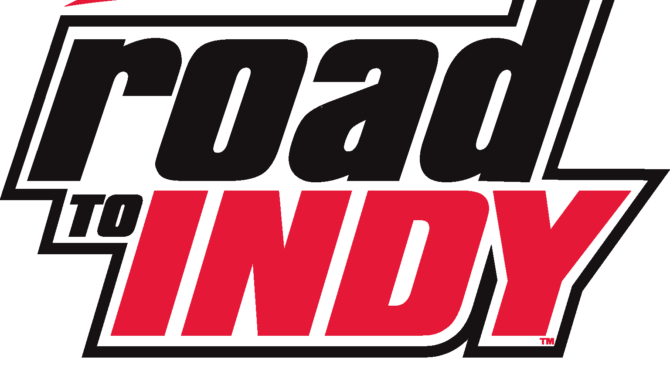 Below are the qualifying results from the PRO2000 and Indy Lights series. The Pro 2000 series will have their second qualifying session Saturday morning from 8:00am-8:20am. 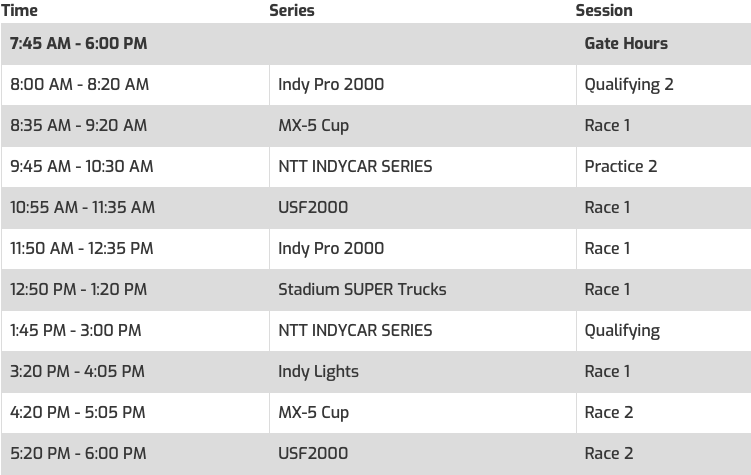