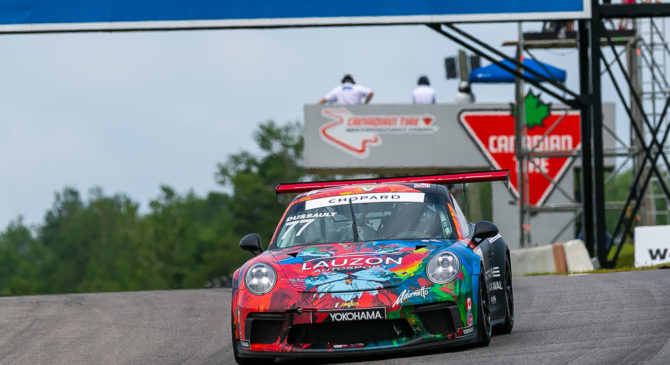 Dussault posted consistent and quick times throughout practice sessions and qualifying, and started the first race in 3rd place. He managed to climb to the second spot and was able to defend his place for a few laps, before he had to concede a spot. He finally achieved his third podium finish this season, at the wheel of his Lauzon Autosport n°77 Porsche GT3 Cup.

“I had a good start and I have been able to climb to the second spot, but Jeff Kingsley was faster than me at the end. I tried to keep my place, but I didn’t want to fight too much and risk everything. I played safer to earn precious championship points,” said Dussault.

The 45-minute race on Saturday has been contested under extremely hot conditions.

“It’s probably one of the toughest races I have taken part in. It was a very hot and humid day, so the temperature on track and in the car was unbearable,” he stated.

On Sunday, the Lauzon Autosport n°77 Porsche GT3 Cup took the start from the fourth place. When another driver made a mistake while fighting for a position, Dussault has been able to take the third spot and achieved his second podium finish of the weekend, his fourth in 2019.

“It was a very good weekend for us. We were quick and we scored championship points. I’m now third in the championship standings halfway in the season. We are looking forward to the Toronto Indy, just next weekend,” Dussault concluded.

Patrick Dussault and the Lauzon Autosport n°77 car will be back on track next weekend as the Porsche GT3 Cup Challenge Canada presented by Yokohama resumes on the streets of Toronto, during the Toronto Indy weekend.