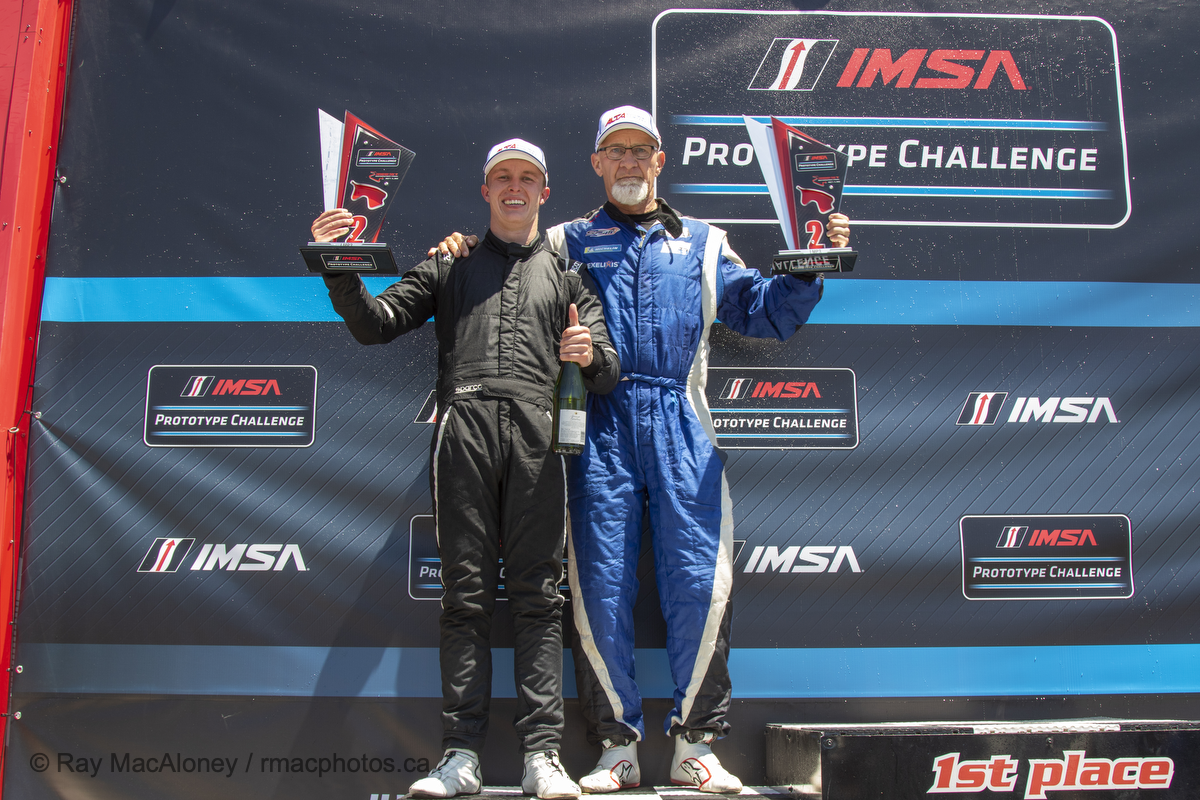 Alberta native Parker Thompson had a prominent performance, driving the No. 14 Sean Creech Motorsport Exelixis/Focal One/Alta Equipment Ligier JS P320 in Prototype Challenge as IMSA crossed the border into Canada for the first time since 2019. Sporting a livery featuring American stars and stripes and the Canadian maple leaf, Thompson and co-driver Lance Willsey were keen to make a mark on the holiday weekend festivities at Canadian Tire Motorsport Park (CTMP). Last month, fueling issues spoiled an impressive performance by the pair in their debut together in Round 2 at Mid-Ohio. A strong result at CTMP would bring redemption and elevate the team’s position in the season’s points standings. Through a ninety-minute race on the historic Ontario road course, Thompson and Willsey accomplished precisely that, piloting their white, red, and blue SCM machine to a second-place finish.

The high-speed, undulating Canadian Tire Motorsport Park circuit presented a daunting challenge for much of the field after nearly a three-year absence from the IMSA schedule. Thompson however, entered the weekend with a stellar record on the track, showing eight career podiums and a total of four wins. On his first laps in Saturday’s Practice 1, he immediately appeared comfortable, setting a benchmark time for the Prototype Challenge field. Less familiar with the 3.957-kilometer, 10-turn road course, teammate Lance Willsey showed quick progress through practice sessions. When Qualifying launched on Sunday morning, Willsey earned an eighth position start.

Thompson, Willsey, and Sean Creech Motorsport shined when racing action began. From P8, Willsey made steady progress early in the race. When he entered the pits at the halfway mark, he had moved his way into fifth place. After the driver change and refueling, the team suffered a setback. Race officials deemed that Thompson had been released from the stop a half-second short of the minimum requirement. He was immediately called back into the pits for a stop-and-go penalty.

The No. 14 had dropped back to seventh place when Thompson re-entered the track. From there, he showed the dominant pace we had seen in May during Round 2 at Mid Ohio Sports Car Course. Navigating through the field, Thompson put together a series of laps that saw him set and reset the fastest racing lap multiple times, advancing his position to fourth. When a full-course-yellow was required late in the race, Thompson capitalized on the subsequent restart, capturing two spots to claim second place. Having already made significant advancements throughout his stint, Thompson had limited capacity to challenge the race lead. He held second through to the checkered flag.

Parker Thompson
“From start to finish, I’m so proud of our effort this weekend in Prototype Challenge. When Lance and I got together earlier this year, we felt we could challenge the front of the field. That didn’t quite pan out in our first event at Mid-Ohio, but I’m delighted that both of us put it together here at Canadian Tire Motorsport Park. For me, it’s incredible to do it in Canada, where I haven’t had an opportunity to race in almost three years. I feel like the sum of my experiences showed in my performance here today – from the races earlier in my career here at this track to the frequent race restarts I’ve seen in Carrera Cup recently. Thank you to Sean Creech and Lance Willsey for allowing me this opportunity. With our finish this weekend, we can only do one better! In the future, I’d be honored to do exactly that.
For the present, Thompson has his sights set on another significant Canadian event. He will reunite with JDX Racing when Carrera Cup North America visits the Honda Indy Toronto, July 15 – 17. Marking Carrera Cup’s first and only stop in Canada, the event is particularly significant to Thompson and JDX Racing team principal Jeremy Dale. Each has strong connections to the region. Currently sitting second in that season’s championship, the pair will look to advance their position in the standings by winning on the Streets of Toronto.

Congratulations to the Canadian team of Pfaff Motorsports on their victory in the GTD class at the Twelve Hours at Sebring race tonight. The #9 Porsche 911 GT3R was driven by Canadian Zach Robichon, Laurens Vanthoor and Lars Kern.