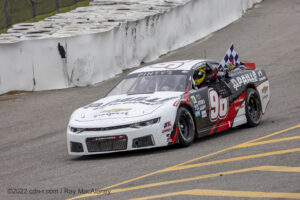 Bowmanville, ON, September 5th, 2022 – Marc-Antoine Camirand clinched a brilliant victory to increase his point lead, as the NASCAR Pinty’s series was at the Canadian Tire Motorsport Park this weekend. His Paillé Course//Racing teammate Andrew Ranger scored an eight-place finish after leading some laps in the race.

Marc-Antoine Camirand came to CTMP as the NASCAR Pinty’s championship points leader and aimed at securing as many points as possible with two races to go in the season. He showed great speed throughout the weekend. Camirand scored the pole position after being second in practice earlier Saturday, and for the third race in a row, he started first on the starting grid.

He kept the first place for six laps, before he was passed by Kevin Lacroix but kept putting pressure on the leader. Then, when the first caution occurred, he stopped for fuel first, and stopped a second time to change the left tires but didn’t take fresh right-side tires. The GM Paillé/Chevrolet Camaro n°96 Camaro was tenth at the restart, in front of his championship opponents who took four tires.

This strategy turned out good for Camirand. He managed to climb back the field in no time, and when he took back the lead from his Paillé Course//Racing teammate Ranger, he never looked back. He held Kevin Lacroix who was tailing him for the lead, and won his third race of the season, his first this year on a road course.

“I couldn’t have dreamed of a better weekend. We were looking to secure our championship place, but we ended up increasing that lead with that win. I couldn’t thank my Camirand Performance crew and the whole GM Paillé family enough for that victory,” said Camirand after the race. He now holds a 33-point lead over Kevin Lacroix with one race to go.

His Paillé Course//Racing teammate Andrew Ranger experienced a more difficult weekend on the fast road course located near Bowmanville, ON. Ranger qualified in fifth place on Saturday, after having issues finding some speed on his GM Paillé/Chevrolet Canada n°27 Camaro during practice. He was hoping for a strong top-five finish in the 51-lap race.

After a timely pit stop for fuel just before the first caution, he took the lead of the race and ran good lap times in front of the field. The team chose to pit later in the race to change tires.

“This strategy didn’t turn out like we were hoping to. Even with newer tires, I had some trouble climbing back the field,” explained Ranger. He scored an eight-place finish at the end of the WeatherTech 200.

Paillé Course//Racing, Marc-Antoine Camirand and Andrew Ranger will be back on track for the last race of the NASCAR Pinty’s series 2022 season, on September 25, at Delaware Speedway, near London, ON. 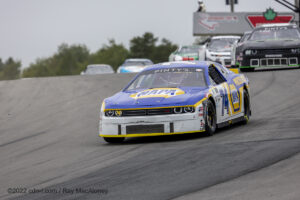 The driver of the #74 Lacroix Tuning | NAPA Auto Parts | Valvoline. car finished second after this fiery race. “With the championship race so close, I needed this win,” said Kevin Lacroix after the race.

He was well on his way to climbing on the top step of the podium after setting the fastest time in Saturday morning’s practice session and 3rd in qualifying.

At the start of the WeatherTech 200, Lacroix took the lead after just a few laps. Leading the field, Lacroix built a comfortable lead that melted during the first caution. Taking advantage of the caution flag, half of the field came down pit road, first for fuel, then a second time for the left side tires, and a third time for the right side tires.

The then race leader Andrew Ranger opted for a different strategy, staying on track. Starting 9th, Lacroix worked his way up to 3rd, where he was stuck behind Andrew Ranger and Marc-Antoine Camirand for a while before claiming second place.

The race had two more cautions. The last one spiced up the battle for the win with a few laps to go. Lacroix started in the second position and had to overtake Camirand while watching out for Gary Klutt behind. Camirand took advantage of the fight between Lacroix and Klutt to pull a gap. However, with two laps remaining, Lacroix was able to catch up with his main competitor. The 51-lap race ended with Lacroix in second place.

“Marc-Antoine (Camirand) did not make any mistakes during the race,” explained the driver of the #74 NAPA Auto Parts | Valvoline | Lacroix Tuning car. “It was hard to fight against him, but we had a great car, especially at the end. I wish the race would have lasted longer, but he deserved the win, and we are happy with 2nd place!”

Saint-Eustache (QC), September 1, 2022 – Kevin Lacroix has no choice but to win the last two events of the season to ensure he has a chance at winning the NASCAR Pinty’s Championship.

This weekend the Canadian NASCAR Series heads to Canadian Tire Motorsport Park for the final road course event of the season. The driver of the #74 Lacroix Tuning | NAPA Auto Parts | Valvoline  car currently sits in 4th place in the driver’s championship, 28 points off the first position. This is one of the most intense championship finishes that has been seen in years.

“I have no choice but to go for the win at Mosport,” said Kevin Lacroix. “It’s a good thing that this is a track that I know by heart and that I always do well on,” said Kevin Lacroix. Indeed, Lacroix Motorsport claimed the win during the first event of the season, in a fiery finish back in May.

Since his first event in 2016, Lacroix has picked up 6 wins at the Bowmanville track, so he will be looking to add one more to his tally. “It always plays rough at Mosport because most of the drivers in the field know the track as well as I do and could all win the race.”

“Some drivers have nothing left to lose and are aiming for the win at all costs; others have to be more careful and strategic about the championship. I’m between those two; I think I’ll only be able to decide during the race if I take risks to go for the win or if I should be conservative.”

The green flag for the WeatherTech 200 will drop at 1:05 p.m. on Sunday, September 4. Fans will be invited to meet the NASCAR Pinty’s drivers in the paddock at the series truck at 11 a.m.

Trois-Rivières (QC), August 8 – What started as a promising weekend turned into mixed emotions for Kevin Lacroix and the  Lacroix Tuning | NAPA Auto Parts | Valvoline NASCAR team at the Grand Prix of Trois-Rivières on Sunday, August 7th.

“However, I felt like there was a problem, and as a matter of fact, we found a major problem with the engine. So we opted to change it before the qualifying session. The Lacroix Motorsports team worked hard to get me on track, completing the work just minutes before the session.”

The decision to change the engine paid off, as Lacroix grabbed pole position in front of a lively crowd decked out in Lacroix Tuning | NAPA Auto Parts | Valvoline shirts.

All the signs were pointing towards a good race ahead, since Lacroix is a master on the streets of Trois-Rivières, and has been unbeatable on the road circuits so far this season.

Lacroix lost the lead off the start, but he was not intimidated and did not let Marc-Antoine Camirand out of his sight. However, on lap 3, Lacroix had an electrical problem that forced him to pit. He rejoined at the back of the pack without losing a lap to the leaders. He kept his chin up, put in the work, and moved back up to fourth.

“Despite the bad luck at the beginning, we still had a great race,” said Lacroix. “I think we could have hoped for a podium finish with a good strategy. However, my engine had other plans!”

On the 23rd lap, Lacroix’s engine, which looked like it was going to provide a promising performance, suddenly stopped working. It was an abrupt end to the race for Lacroix and his team. “I’m disappointed because I always win on the streets of Trois-Rivières. It seems that our bad luck has not left us just yet. However, I want to thank all the NAPA Auto Parts and Valvoline guests who were on site to cheer me on.”

The next NASCAR Pinty’s event will be August 16th at Ohsweken Speedway, a dirt track!

After winning in the series’ visit to Road America in 2021, Thompson was a favorite again in 2022 and showed great pace in his opening laps around the 4.0-mile Wisconsin road course. Drama struck in Qualifying on Friday afternoon when a technical infraction by championship leader Kay Van Berlo and Kelly Moss Racing teammate Riley Dickinson disqualified the duo from the session. Thompson and the white, red, and yellow No.9 claimed an official lap record and pole position for races on Saturday and Sunday morning.

Thompson fully capitalized on his position at the front of the thirty-two car field when Race 1 began. The twenty-four-year-old Canadian drove a flawless race, leading from start to finish, claiming the fastest lap bonus, and earning twenty-eight out of a maximum twenty-eight points available.

Changing weather complicated Thompson’s effort for Race 2 on Sunday morning. With light rain expected for the duration of the 45-minute race, Thompson took a commanding lead when the race launched on a wet track. However, when the rain tapered off and the road surface began to dry, Thompson showed some challenges. He defended his lead valiantly for multiple laps but ultimately surrendered to the pace of MDK Motorsports driver Trenton Estep. He would hold second through to the checkered flag.

A win, a second-place finish, and bonuses for pole position and the fastest race lap contribute fifty points to Thompson’s 2022 campaign. That total matches his best weekend in the Carrera Cup North America series and is imposing in the context of other top drivers’ struggles. Thompson gained thirty-six points on the championship leader and now trails by just sixteen points.

From here, the series heads to Indianapolis Motor Speedway on September 3rd and 4th, where Thompson will hope to draw closer still. The one-time Formula 1 circuit is only minutes from Thompson’s current home and a venue where he has earned wins in multiple series throughout his career.

Parker Thompson
“Lots of positives here at Road America – Our first pole position in the series and a big win in Race 1 yesterday! We would have loved to pair that with another win today, but the track conditions didn’t quite work out as planned. Nevertheless, we took a big step forward in the championship race. That’s what it’s all about! With just four races remaining, everyone on this team can feel our goal is within reach. Indianapolis Motor Speedway is next. We expect to have another weekend like this one!”