During last month’s Toronto Honda Indy I was able to present a photo I had taken at the St. Petes Grand Prix in March to James Hinchcliffe and some members of the Holmatro Safety Team. The idea for the photo came to me as I was standing between turns 1 and 2 waiting for the Indy Cars to come on track for the first practice session of 2016.  As I started panning the cars coming through pit out onto the track I noticed what was in the background of the shots, the Holmatro Safety Team hauler. That’s when the lightbulb went on and the idea of shooting James’ car with the hauler in the background came to me, with the critical role the team played in helping save James life last year at Indianapolis I thought what a great momento this would be ( especially after grabbing the pole for the 100th Indy 500 race in May ). Although James had done some testing since his accident this was the first official race weekend back in the car and the shot was taken during the first practice session.

After showing the image to a couple of friends the idea came up of having the safety team sign the photo before giving it to James, from there it was decided that having it framed with a matte would be best as the team could then sign the matte before framing, at this point I also decided to have James sign one that I would present to the team.

Next step was getting the mattes signed and framed before the Toronto race, luckily I had planned on attending the Road America race weekend. I put the photos in cardboard and used a larger than I needed suitcase to carry the photos in as I was flying to this race. Once at the track I met Mike Yates and told him my idea and he was onboard with it so I left the matte with him for the weekend to have the team sign it, as a bonus Mike told me the crew who were there to help James that day at Indy were also at this race. Next up was meeting Fiona Hewitson, James PR person. I explained my idea to her and she was also on board. She was even kind enough to not let James see the matte the team had already signed as to keep the surprise .

Final step was getting permission from my cardiologist to let me attend to present both images to James and the Safety Team, which was done at James’ hauler at the Toronto Honda Indy one week to the day I had suffered a heart attack. 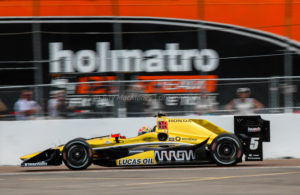 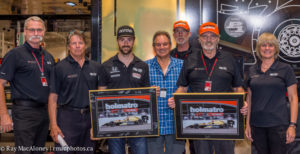 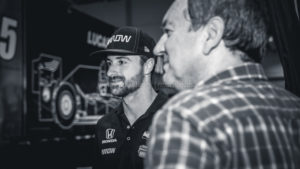 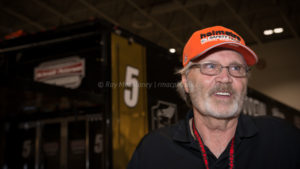 Special thanks to the following for helping me pull this together: