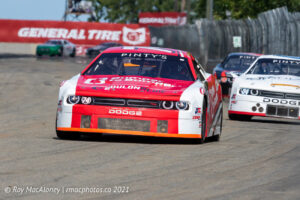 Saint-Eustache (QC), August 26, 2021 – It will be a busy weekend for Team Bumper to Bumper as they will be racing three times on two different tracks this weekend. Kevin Lacroix will be on track on Saturday at Complexe ICAR in Mirabel and will head to Autodrome Chaudière in Vallée-Jonction the following day.

The Complexe ICAR holds a very special place for the Saint-Eustache driver as he scored his first NASCAR Pinty’s win there in 2015. He is the one who last won at ICAR when he claimed the win during the 2017 event.

“I would love to win Saturday’s race, as it would give me a hat trick at ICAR with three wins at this track,” said the driver of the Dodge #74 Bumper to Bumper  / Lacroix Tuning.

The Lafleur 75 will take place on the small road course on the tarmac of the old Mirabel airport. The green flag will be given at 4 pm on Saturday, August 28. The event will be broadcasted on RDS2 on September 11 at 2:30 pm and on TSN on September 5 at 4:30 pm. All events will air live from the TSN mobile application.

It’s a return to oval racing for Lacroix and the NASCAR Pinty’s drivers, as right after the Mirabel event, the team will head to Vallée-Jonction. “We’ve done two tests at Autodrome Chaudière this season, so we should have a good car.

For Kevin, the key will be speed and concentration at this event; “I had problems at Sunset Speedway, I was fast in practice, but I made a mistake in qualifying, and we can’t let that happen again,” he concluded.