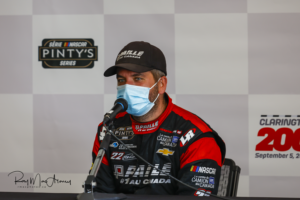 Camirand Wins the Clarington 200 at CTMP!

Bowmanville, ON, September 5, 2021—Marc-Antoine Camirand sealed a long-awaited victory, on Sunday, as the NASCAR Pinty’s series was at the Canadian Tire Motorsport Park. The driver of the GM Paillé n°22 Chevrolet Camaro was eager to come back strong for this weekend’s doubleheader on the fast-paced road course, and that is just what he did: he secured his second NASCAR Pinty’s career win on Sunday, and he added another podium finish, on Saturday.

After a difficult beginning of the season including two DNFs in a row, this very strong weekend is just what Camirand had hoped for a long time. Primed by his runner-up finish on Saturday, he entered the Clarington 200 aiming at another podium finish.

Sixth on the starting grid, Camirand felt that his GM Paillé n°22 Chevrolet Camaro was very fast, but he knew he needed to be patient to be in good position at the end of the 51-lap race.

22 Racing team pit stop strategy for fuel and tires turned out to work just perfectly. “My crew chief Randy Steckly called me to the pits for a quick refueling early in the race, during the first caution around lap 8. Then, I went back to the pits around mid-race to take new tires. From that moment, I knew that I was in a good position to fight for the victory. While the other drivers still had to stop, I was just behind them,” Camirand explained.

Camirand climbed to the second spot and kept putting pressure on the leader, his 22 Racing teammate Alex Tagliani. “Alex didn’t stop for tires, so I knew that I would be faster at the end. I just had to be patient, because I didn’t want to push too much to save my mechanic,” he said.

With five laps to go, his GM Paillé n°22 Chevrolet Camaro was still very fast, and Camirand finally took the lead outside turn four and never looked back again, even creating a small gap behind him. He captured his second win in career in the NASCAR Pinty’s series, his first since Saint-Eustache in September 2018.

“It feels so good to finally be back in the winners’ circle! We had been having hard luck for some time now, and I knew we were able to achieve great results here, where we’ve had success in the past. I am so happy and relieved that all our hard work finally pays off! We are looking forward to the next races and we are heading up there with momentum!,” Camirand stated.

On Saturday, Camirand had also achieved a long-awaited podium finish, during the Olymel Grand Prix of Ontario. Sixth after qualifying, he managed to keep a good pace throughout the 30-lap race.

Camirand moved up to second place with a few laps to go and managed to put pressure on the race leader. “My GM Paillé n°22 Chevrolet Camaro was fast at the end, but I missed some time. I think that if I were given one or two laps more, I could have a chance for the win on Saturday, but I’m very happy with this runner-up finish! It is a great way to come back strong after weeks of misfortune,” Camirand concluded.

After this strong weekend on the Canadian Tire Motorsport Park road course, Marc-Antoine Camirand takes his GM Paillé n°22 Chevrolet Camaro to oval tracks, as the NASCAR Pinty’s series resumes next Sunday for a doubleheader at Flamboro Speedway, located in Milgrove, ON.