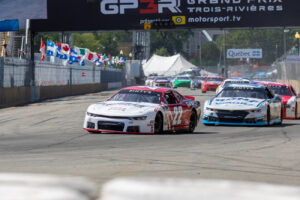 Trois-Rivières, August 15th, 2021 – Marc-Antoine Camirand and GM Paillé were full of hope when they entered the 51st Grand Prix of Trois-Rivières; Camirand had not one, but two chances to improve his own record for most victories (14) at GP3R, as he was racing in the Défi Urbain Chevrolet and the NASCAR Pinty’s series. Although he qualified strong for both races, he was forced to retire early in both events.

Camirand had been fast all weekend at the wheel of his GM Paillé n°22 Chevrolet Camaro in the NASCAR Pinty’s series. Second in practice, he also qualified outside pole for Les 60 tours des Anges Gardiens, the main event of the 51st Grand Prix de Trois-Rivières.

“I really thought that it would be a great weekend for me at GP3R. I wanted to achieve a 15th win at this event,” stated the driver from Saint-Léonard-d’Aston, located just 20 minutes south of Trois-Rivières.

After the green flag dropped for Sunday’s race, Camirand managed to stay in second place and kept a good pace behind the leader. He knew that his GM Paillé n°22 Chevrolet Camaro was fast and that he would be able to fight for the lead later in the race. Unfortunately, he completed only nine laps out of 60 and was forced out of the race because of a transmission failure.

“I am so disappointed of how the weekend finally turned out. I know that we had a car to win and it makes the situation even more frustrating. There is nothing that I could have done differently. We have been having hard luck for a few years here in Trois-Rivières and I’m just hoping that this is now behind me… We will come back next year to finally get that 15th win at GP3R,” Camirand told.

Marc-Antoine Camirand and the GM Paillé team also experienced difficulty on Saturday, for the Défi Urbain Chevrolet. DIRT Sportsman Modified were on the GP3R narrow street course in a unique race, as these cars are used to race on clay oval.

Marc-Antoine Camirand teamed up with dirt track specialist David Hébert with ONE Racing team, and quickly managed to adapt to these open-wheel cars used to turn left only on a totally different racing surface.

He qualified on pole on Friday, and he was aiming at a podium finish for his first race in a DIRT Sportsman Modified car. Camirand didn’t make it through the first turn of the race, as he was pushed from behind at the green flag and wasn’t able to turn. His GM Paillé ONEc car ended up in the tire barrier outside turn one.

“I’m the one who had to dictate the pace before the green, but the car behind entered turn one faster than me and pushed into my rear bumper so hard that I couldn’t make my car turn right. I really thought that I could have a good race, but it’s a shame that it ended up that way. I’m disappointed for my sponsor GM Paillé and ONE Racing team who worked very hard to prepare the car for GP3R”, Camirand explained.

Camirand’s teammate in the Défi Urbain Chevrolet, David Hébert, was having a strong race in the GM Paillé ONE car. He was fighting for the lead with only a few laps to go, but he was given a disputed penalty and was forced to go to the rear of the pack.

Marc-Antoine Camirand will be back on track at the wheel of his GM Paillé n°22 Chevrolet Camaro in two weeks, as the NASCAR Pinty’s series heads to Circuit ICAR in Mirabel, QC, on Saturday, August 28th, then to Autodrome Chaudière in Vallée-Jonction, QC for a doubleheader on Sunday, August 29th. David Hébert and the GM Paillé ONE car will be back on dirt at Autodrome Granby, next Friday.