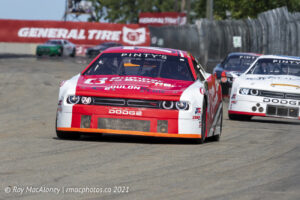 Trois-Rivières, QC, August 16, 2021 – Kevin Lacroix finished on the third step of the podium at the Grand Prix de Trois-Rivières, which hosted a fiery NASCAR Pinty’s race. The Bumper to Bumper team scored its first podium finish of the season and valuable championship points.

On Sunday, the crowd gathered to celebrate the 2021 edition of the Grand Prix de Trois-Rivières, the most popular event on the NASCAR Pinty’s calendar. Kevin Lacroix, a fan of this urban track, had high expectations for the 60-lap event, dedicated to essential workers.

“GP3R is a race that every driver wants to win,” said Lacroix, driver of the #74 Bumper to Bumper  / Lacroix Tuning Dodge. “The level of the field was particularly strong, so I knew it wasn’t going to be an easy race.”

Lacroix was very fast in Friday’s practice session, setting the third-fastest lap time behind Marc-Antoine Camirand and Louis-Philippe Dumoulin. However, in the qualifying session, Lacroix could only post the 6th fastest time before having an incident that forced him to retire from his fast lap.

Far from being satisfied with this position, he began his ascent right at the start of the race on Sunday afternoon. In front of a sea of fans wearing red Bumper to Bumper jerseys, Lacroix worked his way through the field quickly, setting his sights on pole position.

It was on the mid-race restart that Lacroix was able to take the lead from Alex Tagliani. A heated battle ensued between the two competitors until Kevin fell back into 2nd place a few laps later. The last few laps were the ones that caught the attention of the audience as Louis-Philippe and Jean-François Dumoulin, and Lacroix had an intense battle.

Kevin Lacroix had to settle for the third place while Jean-François Dumoulin had the better of their battle on the track.

“The team worked very hard to give me a perfect car,” said Lacroix. “We were very fast the entire race, and I think we had a chance for the win, even if I had to keep the #04 (J.F. Dumoulin) behind me! In the last few laps, I felt I was getting back on Alex (Tagliani), so I was both stressed and confident…in both ways!”

“It’s a shame there was a final restart on lap 56 because it would have been a great fight for the win between the three of us. The late restart came in to shuffle the cards, and the top two got away,” Lacroix concluded.

“I was thrilled to see all the fans in red in the stands; it certainly motivated me!” Indeed, the Bumper to Bumper fans were a big part of the stands, all cheering Lacroix on.

The next NASCAR Pinty’s races will be in two weeks, August 28 at Circuit ICAR and August 29 at Vallée-Jonction. The GP3R race will be broadcast on TSN on Sunday, August 22, at 1 pm.