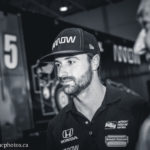 INDIANAPOLIS (Thursday, Feb. 23, 2017) – Two of Canada’s most successful active racing drivers will travel from Florida to Italy for a first-hand experience of how the other half lives. After years of discussing the possibility, Schmidt Peterson Motorsports driver James Hinchcliffe – the pole sitter for the 100th Running of the Indianapolis 500 presented by PennGrade Motor Oil – and current DTM touring car driver Robert Wickens will swap rides in separate test sessions in the coming weeks.

Wickens will get the first turn behind the wheel of Hinchcliffe’s No. 5 Arrow Electronics Schmidt Peterson Motorsports Honda during a private team test at Sebring International Raceway in Florida on Feb. 28. Hinchcliffe is scheduled to drive the HWA Team’s factory Mercedes AMG at the Vallelunga Circuit outside of Rome on March 17. The two Canadians are excited to see the opportunity finally come to fruition.

“This whole thing is something that Robbie and I have joked about for a long time because, frankly, we weren’t sure it was ever going to happen,” said Hinchcliffe, a four-time race winner in the Verizon IndyCar Series. “We both had an interest in kind of sharing our series with each other, and we kept talking about it. We decided we were going to try and take a swing at it, talked to all parties involved and amazingly it all worked out.

“It’s just a cool story; you’ve got two kids that grew up racing go-karts in Ontario,” Hinchcliffe continued. “Fast forward a decade and a half, and here we are both professional racing drivers. To be able to get to do this, and share it with each other, is going to be awesome.”

Wickens has collected a total of five race wins and four poles during the last five seasons in DTM, the German touring car series that competes on road courses throughout Europe. The 27-year-old Toronto native finished fourth in the series championship in 2016 and is preparing for another season with HWA this year.

“James and I have been friends for years and this ride swap is something we’ve wanted to do for a long time,” Wickens said. “We’ve seen some other drivers do it in the past – Formula One and NASCAR and all that – and we thought it would be a cool opportunity to do with DTM and INDYCAR. It wasn’t easy planning it and making everything work, but I’m really looking forward to the opportunity of driving his car. Everything aligned and here we are.”

While Hinchcliffe and Wickens compete in different championships currently, they followed similar paths through the ranks in their careers – both competing in Formula BMW, A1GP and the Champ Car Atlantic Series. After finishing third in the Atlantic championship in 2003 – and before beginning his DTM career in 2013 – Wickens then moved to the European open-wheel ladder system where he competed in British Formula 3, FIA Formula 2, GP3 and Formula Renault 3.5.

“Robbie comes from a single-seater background so he’s raced at one level below INDYCAR and he’s going to know roughly what he’s getting himself into,” Hinchcliffe said. “It’s been a while, so I think it’s going to be a big wakeup call, and I think he’ll be very impressed with what the Indy car has to offer. For me, I’m going to a country I’ve never raced in, on a track I’ve never been to, in a type of car I’ve only seen in person, so I think it’s going to be a much bigger culture shock for me. We’re just both super excited and thankful to all the parties involved for making it happen.”